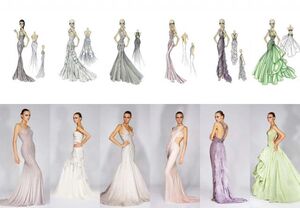 Haute Couture (French for "high sewing" or "high dressmaking") refers to the creation of exclusive custom-fitted clothing. Haute couture is made to order for a specific customer, and it is usually made from high-quality, expensive fabric and sewn with extreme attention to detail and finished by the most experienced and capable seamstresses, often using time-consuming, hand-executed techniques. Couture is a common abbreviation of haute couture and refers to the same thing in spirit.

It originally referred to Englishman Charles Frederick Worth's work, produced in Paris in the mid-nineteenth century. In modern France, haute couture is a "protected name" that can be used only by firms that meet certain well-defined standards. However, the term is also used loosely to describe all high-fashion custom-fitted clothing, whether it is produced in Paris or in other fashion capitals such as Milan, London, New York and Tokyo.

The term can refer to:

In France, the term haute couture is protected by law and is defined by the Chambre de commerce et d'industrie de Paris based in Paris, France. Their rules state that only "those companies mentioned on the list drawn up each year by a commission domiciled at the Ministry for Industry are entitled to avail themselves" of the label haute couture. The criteria for haute couture were established in 1945 and updated in 1992.

To earn the right to call itself a couture house and to use the term haute couture in its advertising and any other way, members of the Chambre syndicale de la haute couture must follow these rules:

However, the term haute couture may have been misused by ready-to-wear brands since the late 1980s, so that its true meaning may have become blurred with that of prêt-à-porter (the French term for ready-to-wear fashion) in the public perception. Every haute couture house also markets prêt-à-porter collections, which typically deliver a higher return on investment than their custom clothing. Falling revenues have forced a few couture houses to abandon their less profitable couture division and concentrate solely on the less prestigious prêt-à-porter. These houses, such as Italian designer Roberto Capucci, all of whom have their workshops in Italy, are no longer considered haute couture. Many top designer fashion houses, such as Chanel, use the word for some of their special collections. These collections are often not for sale or they are very difficult to purchase. Sometimes, "haute couture" is inappropriately used to label non-dressmaking activities, such as fine art, music and more.

Community content is available under CC-BY-SA unless otherwise noted.
Advertisement